Welcome to the Iron Maiden simple guide for Artery Gear: Fusion! In this post, we will go over the mechanics and team compositions you can use to beat this boss. This is probably the least popular boss to farm as attack set is the only one here that people will try to farm, with the other 2 sets outperforming HP and DEF sets as you can easily get a better bonus from sub stats.

Here is an example run on Iron Maiden 8:

Now, if you have Alice here, the first clear on difficulty 8 and 9 will be a lot easier. Here is another simple video guide by Gacha Mogul on difficulty 9: 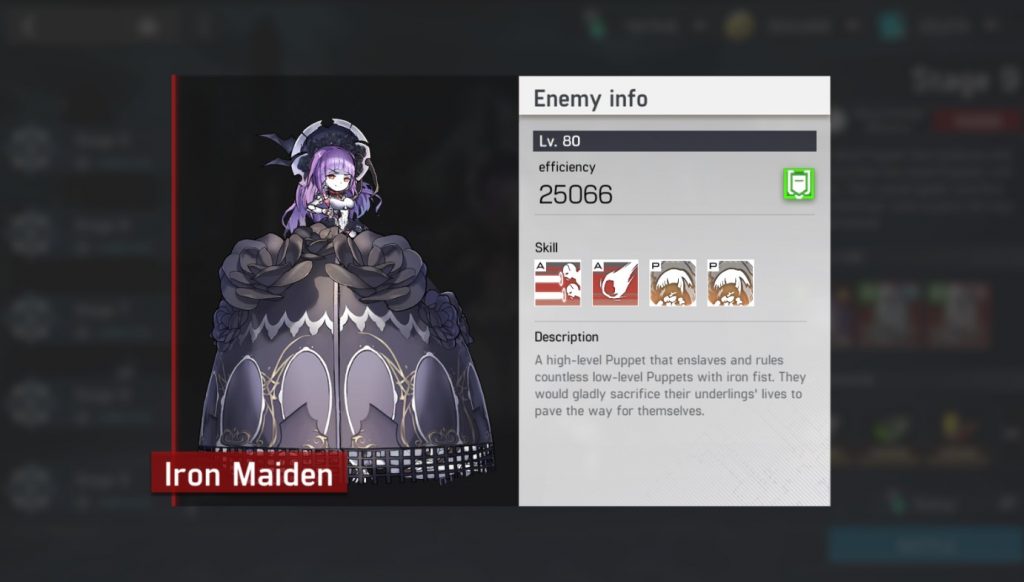 Let’s take a look at the boss skills.

Whip and Lash – Deal damage to all enemies and inflict SPD Reduction for 2 turns.

Graceful Blessing (4 Turns) – Deals to all enemies and reduce their Action bar by 30%. If the target has SPD Reduction, also Stun them.

Sadistic (Passive) – Upon taking a hit, grant 15% Action bar to all allies. If there are no other allies, gain 10% action bar.

Exhilaration (Passive) – Upon taking a hit, gain DEF Boost that lasts until this unit takes action.

The Iron Maiden is a relatively slow boss compared to the Centaur. However, she can become faster and increase her action bar when you keep hitting her. She can apply AoE slow to your whole team when she attacks with her basic skill. Her puppets can heal her and also provide her with an attack and defense buff. Her special attack can stun your team if they have a speed debuff.

The easiest way to winning the fight will be the following:

Once you have these in check, you will need to the gear to a decent level and the units to complete it.

The battle sequence always starts with Iron Maiden going first, with the puppets slightly behind. If you hit her with any of your units, it will increases her and her puppet’s action bar by 15%. So you need your DPS and support units faster. On difficulty 7/8, its best to have your units speed above 170+. For 9 you need about 180 minimum.

Her puppets will constantly heal and provide the attack and defense buff every round. Unless you have a unit that can stun lock the puppets, it is much better to only focus on killing Iron Maiden as soon as possible.

On round 4, she will use her special attack, which does big damage and can stun your units if they have the slow debuff. If you are running a beginner team with no damage mitigation, it is highly unlikely you will survive after this. 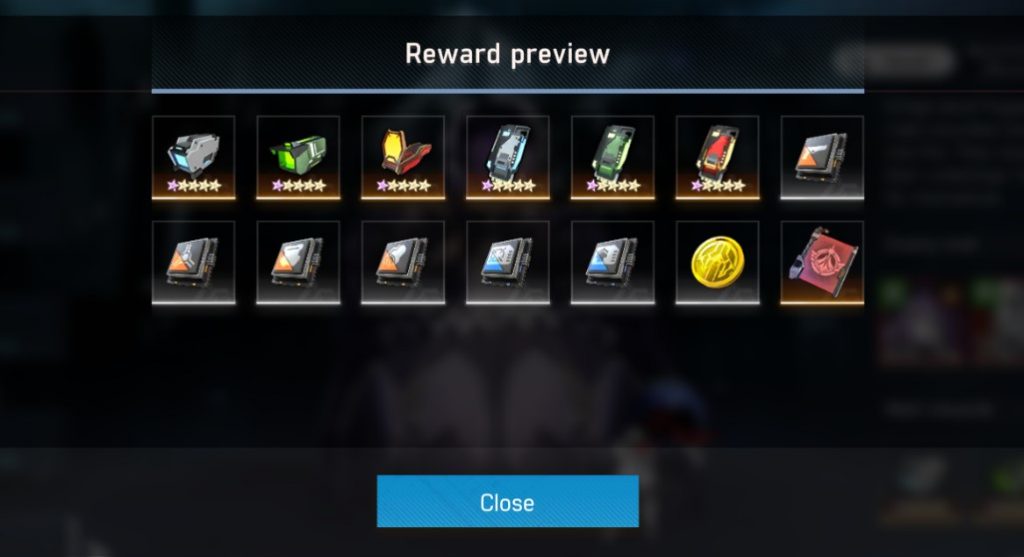 Iron Maiden 1-4 is pretty straight forward. Once you get to difficulty 5, it starts getting a bit harder even when you have a full 5 star team. At level 7, you will start to need at least Roko on your team if you don’t have any Green/Fire DPS built. Difficulty 8 and 9, you can use Roko to cheese as well. However, if you want stable runs, then you need to invest in gear.

Most of the time, people farm difficulty 7 because you can get good sub stats from there and transfer them to other parts of the gear. The only time you farm difficulty 8 is to get ATK% or SPD Attack Set Propulsion System. Difficulty 9 is not really worth since you can farm Harpist 9 for a crit set to complete your DPS gear.

For sub stats on the gears, you want to look for:

Since difficulty 7 rules out Flat DEF and Flat HP, you have much better chances to get the rolls above.

You are going to need this one 3 star unit who is the best budget unit aside from Grace for F2P players. She is:

She is the corrosion specialist that can take off 5% of the enemy max HP per tick. Since Roko can apply 2 stacks of corrosion on her third skill and potentially one more on her first skill, she does her job well here. Her second skill extends any debuffs on the boss, which is vital in keeping corrosion and your ally’s infirmity buff up to prevent the heals.

She is very easy to skill up as you only need +4 on her skill 3 to work. You can skill up her first skill to +4 as well for up to 50% chance to apply 1 corrosion stack. Having her alone will help you clear 7/8/9 after you have farmed up some gear from Centaur.

With Roko being the star of the show, she needs a good supporting cast to help her kill the baddie. Here are some really good ones that will help.

The free unit given to us is one of the best for PvE. She can cleanse and heal on her skill 3, with her second skill being able to push a unit of choice (in this case Roko) and REDUCE their skill cooldown by 1 turn. This allows Roko to cycle her skill quickly without using the cheat code Alice. She can also apply blind on skill 1, but that is not reliable as most new players will not have the stats for that.

This unit is overlooked because she is a 3 star. However, she provides DEF and SPD boost on her skill 3! This helps as it will counter the SPD down debuff and provide your team with damage mitigation. She can heal the entire team via skill 2 with some regen heal too. Her skill 1 can cleanse 1 debuff off a random ally when max skilled. This makes her the best budget support outside of Morris. However, she does have very slow base speed, so you will want to at least use a speed set to get her to about 120+ speed.

Gray is the best budget option for for this mode. Her skill 3 can apply attack down, which will help your team survive better. The most important debuff however, is Infirmity on skill 2. It will prevent Maiden from healing and she is the only 3 star of fire element to have this debuff at a very reliable chance (100%) to land. Heck, she is already usable at 4 stars with awakening 3 to unlock her skill upgrade. She is part of the difficulty 8 auto team as shown in the above video at the start.

Margot is also a decent choice here. She is free too! She can cleanse 1 debuff off all allies on skill 2 and provide immunity and a big heal to 1 unit + speed buff to herself. These 2 skills are vital and can keep your key units alive. Her skill 1 can also cleanse 1 debuff, although the chance to do so is only 75% when max skilled. It is not as good as Komachi’s, but Margot does have a higher base speed than her.

Winnie is a tank that can provide 3 turns immunity to your entire team! This is great because it takes about 3-4 turns to kill Iron Maiden, so it is just enough to do the job. Her skill 1 can provide a defense buff to the ally with lowest hp, giving them a much higher chance to survive hits from Iron Maiden. Her skill 2 provides a shield for herself, which is more than enough to keep herself alive.

This is the budget robot that can grant your unit an extra turn. She can give Roko the boost she needs to cycle her skills. However, he has low base health and speed, so you need decent gear to make it work. Also, you cannot control who he grants the bonus turn to, so you will need to test it on your team.

She can reduce ally skill cooldowns by 3 turns right away, allowing them to use their important skills almost right away, depending on the unit.

Alice is the most broken unit for new players. Her second skill which grants a bonus turn + attack buff is more than enough to cycle Roko’s skills so she can keep the debuffs up. She will need some health and speed to survive Maiden’s attacks. While she may not be necessary, she does make the early game progression much faster.

Goya can provide infirmity, defense break and burn. However, you do need to upgrade her skill 3 to +4 for the 100% proc chance, which may deter some players from using her. She also doesn’t provide attack down like Gray does, so Gray will be the better choice than her.

Rosemary can be used as a support attacker that can strip buffs off Iron Maiden. Since she also have self casted attack and speed boost from skill 3, she is very reliable. The puppets can still re-apply attack and defense buff though, so she is more suitable in a one shot team.

Nina does big single target damage. Pair her with a defense breaker and buff stripper like Rosemary to help deal more damage. She is only recommended once your team has decent gear.

Like Nina, she can also do the job as the single target DPS, but requires decent gear as well. At least 180+ speed, 100% crit rate and 48% accuracy is recommended.