How to play Gundam Battle: Gunpla Warfare on PC

Gundam Battle: Gunpla Warfare is a 3D mecha action battle game based off the popular science fiction manga series. Build your custom Gundam plastic model (aka Gunpla) and take it into battle against other Gunpla builders to win the Gunpla Battle Tournament! BECOME THE ULTIMATE GUNPLA BATTLE MASTER! 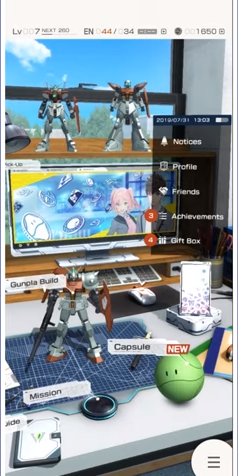 Go to the search bar at the top-right corner and search for Gundam Battle: Gunpla Warfare
4

Once installation completes, click the Gundam Battle: Gunpla Warfare icon in the My Apps tab

Gabriel Manore says
"This game is amazing! I'm surprised at how well the game is made because I love building gundam and I wanted to play this game as soon as I saw the ad and this game is as amazing as its ad. The thing I like most is that even though you can assemble different parts together, you can paint your gundam to look like other gundam and I love that feature because it just makes it not look like a jumbled up mess. This game is amazing."
Phalyx says
"I've always been a HUGE Gundam fan, so when I saw this game available for pre-order, I pounced on it. now that I've actually played it, I can officially say that I love the hell out of it. since I pre-ordered, I got to start with one of my favorite units ever, the Wing Gundam, and because of that, I might be a little biased in favor of the game. but even not taking that into account, it's a really solid Gundam experience, with the battle system feeling really good to use, kitbashing together a custom unit you can be proud of takes maybe about 30 minutes to an hour of gameplay(and on how the parts fall your way), there's all sorts of little things here and there that nod to the main series, and overall is really enjoyable. sure, you can spend money on it if you want, but it's never necessary, and nothing is pay-to-win. you go, you fight, you conquer. and you use the spoils of war to get stronger. tl;dr, get the game if you're a Gundam fan, and if you aren't, it's still a great game to play, and maybe even introduce you to the series."