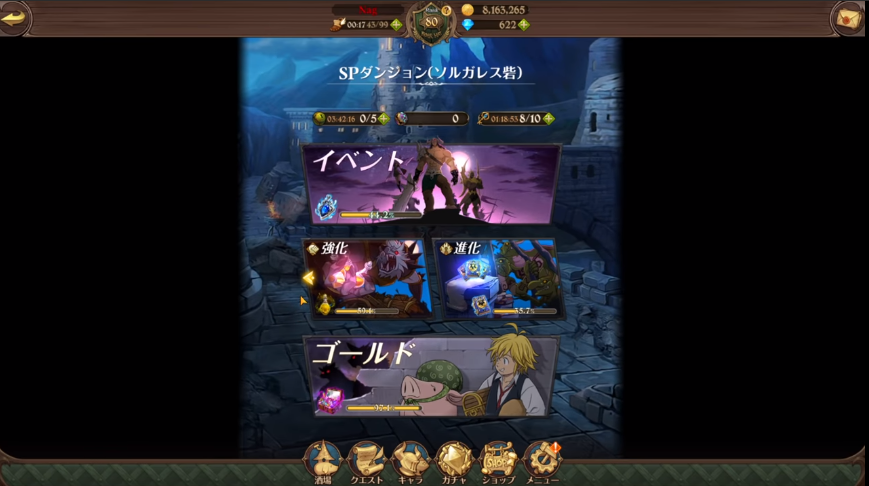 This guide goes over everything you need to know as a beginner in Seven Deadly Sins Grand Cross. Nagato Senpai talks about several aspects ranging from characters, leveling, summoning, and many more.

At the beginning of the game, there are 3 characters that you should reroll for if you can. The first one is Escanor(Green) because he is a fantastic unit for new players because he is overall solid in basically every area of the game.

The second is Meliodas(Green). Another fantastic character especially for the story mode. and Meliodas(Blue) is the strongest unit in the game even though he is not as great at story mode he is still the strongest at the moment.

And a good thing about Meliodas(Blue) is that he is in every banner that comes along. Banners change every so often and new ones show up with new characters so every banner has their pool.

Meliodas(Blue) is in every banner so far. So if you are going to focus on getting one of these characters by rerolling then Meliodas(Blue) might be the easiest to get a hold of.

This is a small segment but important regardless. A lot of people do not know how to do this and it is very important if you want to keep everything you have done.

If you are using iOs then instead of Google play it will be the equivalent to that. and there are also the transfer codes right beneath these options.

How to Play Story Mode

Whenever you want to do the story mode you click on the golden worded banner in the top right of your screen. The game makes it easy because once you tap that banner it will bring up a request to go to that stage.

Once you hit “Ok” it will immediately take you to that stage without having to worry about menu management or navigating anything. It is very user-friendly especially for new players which makes it easier to get around.

Now, how to play story mode can be a bit difficult because story mode is pretty tough. There is a reason Meliodas(Green) as suggested as a reroll character because of how good he is at story mode.

So you should have 7 cards at the beginning of the match. The team that goes first is dictated by whoever has the higher CP.

On your turn, you select 3 cards to play to make actions. You can level up cards in your hand by combining two of the same grade card.

So if you combine two of the same cards that are both level 1 they will become a level 2 version of that card. It follows a turn-based RPG style of combat so it is not to difficult to get the hang of.

Every time you combine a card or make a move you build your ultimate gauge. Once it is built up you can use your ultimate which is a powerful attack.

To level-up and awaken your characters you will find them in the character tab. To awaken them you will tap on the icon on the far left to go to the awakening screen.

You will need specific items to awaken and level-up your characters that you will get from different stages in the game. By going to the SP Dungeon you will be able to enter 3 different stages to get these items.

As for awakening, you need pendants which are a sort of special item required for it. To get pendants you use the top banner in the SP Dungeon section.

The dungeon for pendants takes 5 stamina to do it and that can be a lot for trying to grind out pendants. But stamina is not a huge issue in this game because you get a lot of it by playing and grinding gold.

This is one of the few games that let you buy stamina with gold. So it is very easy to end up with unlimited stamina and not even having to worry about it.

This section of the game is very important so it is a good idea to get familiar with the SP Dungeon area.

Gear is a little complex but in general, you will see the gear and the symbols that it has. The symbol represents what the gear has.

So if the symbol is a sword then it focuses on Attack. If you have 4 of the sword symbol you get a 20% bonus attack from that set.

If you have 2 of the shield symbol you will get 20% bonus defense from having that set. So having full sets is what you want so you can gain that bonus stat boost.

Now, upgrading your gear costs gold and each time it upgrades the price goes up. The higher the gear the less of a chance it has to upgrade and it becomes a game of RNG.

If you want to reroll your gear it also costs gold. Rerolling your gear changes the stat attached to it such as Attack and Defense or Crit Rate and Penetration.

C-R gear costs gold to reroll while SR and up costs gems to reroll. So new players need to focus on C-R gear since it is easier to reroll and not as much of a heavy price.

You can reroll for several different stats on your gear based on what your character is related too. Though focusing on attack, defense, and HP is the best route.

As a Gacha game it, of course, has a dupe system involving having duplicate characters. Dupes are for 3 things, the first increases the amount of damage a character’s ultimate does.

The second reason dupes are important is because of the bonus stats they give to other characters. A 6/6 ultimate character gives boosted stats to another character when being placed as a support unit.

So when you place a 6/6 character on another one that 6/6 is going to boost the selected character’s stats by a large amount. And this applies to all rarities so you could use an SR unit for support on a UR unit. So if you have a more ultimate level on a character it will give more stats as support.

Coin Shop and What to Purchase

Another thing to use dupes for involves the coin shop. In the coin shop, you can go into the shop and use your dupes to get special coins.

In this specific part of the shop, you can buy characters that are specific to this shop. You cannot pull these characters in banners so this is the only way to get them.

Sometimes characters from banners also show up in the shop. So you can choose to save up and buy characters in the shop or wait until they go on a discount.

You can also get coins from SR and R character dupes as well. And each shop sells different things based on the character rank.

In the SR shop, the best thing to buy is the SP balls for the SP dungeons because they are pretty important. Maybe not to new players but in the long run, they matter.

And in the R shop, you can buy a full stamina refresh which adds to your unlimited stamina previously mentioned by using gold. So it is really good to shop for things here if you are not going to use your dupes for characters.

A good thing about this game is that it gives you a lot of free gems. The first place to get them is in story mode from the side quests.

Every time you go through story mode you unlock side quests. And by completing a side quest, you get a good amount of gems.

You can get 30 gems by going through every town with side quests. And there are several towns so you will get a lot in the long run.

For those who might have been playing for a while another way to get gems is through dailies and PvP. Daily missions are unlocked the more you progress through chapters.

By completing the given requirements of a mission will get you gems by doing it. So it is a pretty easy way to get some gems every day.

The way that matters for old players is PvP. On PvP, if you grind to your next level you get 50-60 gems every week. This is the best way to grind out gems is by grinding your level in PvP.

By playing 1 match a day you could realistically rank up easily and obtain the 50 gems per week. So it is really easy to build up gems by using the weekly PvP gems.