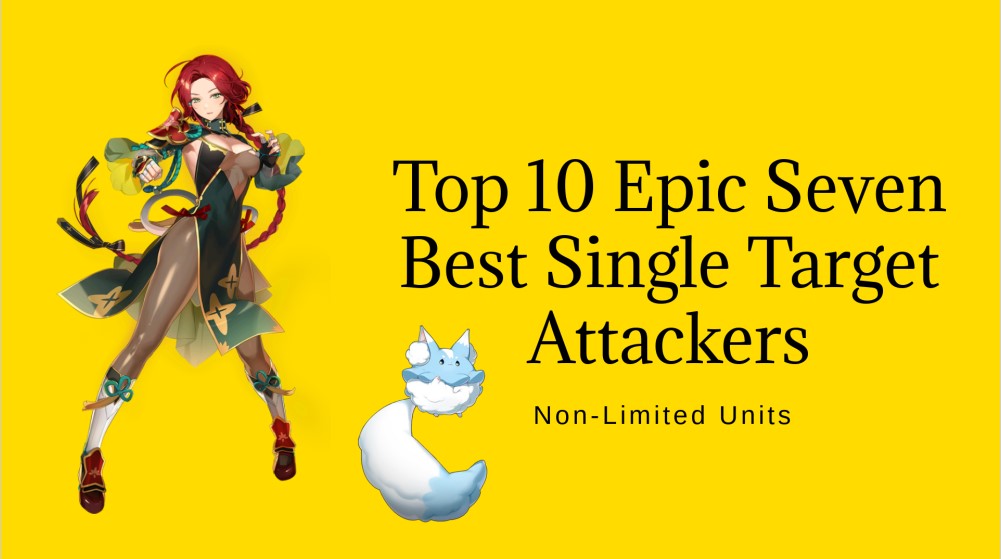 Epic 7 is a great turn based RPG game that is still going strong after 3 years and counting. Over the course of these 3 years, many single target DPS has emerged and some of them are still viable today. In this simple guide, we will be recommending you units that we think are really good. Limited units are excluded – Rimuru, Milim, Sol Badguy, Luna, Baiken etc..

Keep in mind that this is in no particular order as the gear and current meta will alter who ranks at the top of the food chain. I also separated them into fire/ice/nature and light/dark heroes. This list also doesn’t factor in RTA as well.

A relatively new banner and Hwayoung is probably one of the most versatile single target attacker. Even though she is a fire unit, she can also deal with many ice units due to her kit scaling with only attack. Even misses (deals only 75% damage) can kill units like Violet/Remnant Violet or any non ice tank. Her S1 has a built in Uberius Tooth.

Her S3 ignores 100% defense and deals extra damage based on her health up to a 6667 hp difference. Having her at 10k-13k hp is ideal as most tanks/bruisers/healers have 20k health or higher. This will grant her max bonus damage.

Ideal stats for end game are:

A low speed Hwayoung is okay if you don’t have the speed gear for it. She can delete most of the problem units like A.Ravi, Belian, ML Celine and Violet easily, as long as they are not behind Aurius and a thick shield. However, a very well geared Hwayoung can still get through it easily with soul burn.

The key artifact here would be Uberious Tooth, as the extra attack bypasses ML Celine’s passive. All in all, she helps regular players without access to many strong ML units. Other good options are El’s Fist and Merciless Glutton.

He is only a 3 star, but because of the specialty change, he now gains critical hit rate buff on his S3, making him very easy to gear. His S3 gives him an extra turn + a greater attack buff. He can then follow up with S2 nuke (gives +15% hit chance) with soul burn, which provides extinction and is great for dealing with problem units like Arbiter Vildred, ice attackers or any revive teams.

Good artifacts for him include Symbol of Unity, Sasha’s Ithanes and Exorcist’s Tonfa.

In terms of stats, you are going to aim for something like this to make him extremely self sufficient to use without an attack buffer or CR pusher:

If you cannot get speed to more than 200, then a combat readiness pusher is required. For a 3 star unit, I would highly recommend it.

Celine is good at dealing with teams that rely on non-attack skills. Think about problem units like Angel of Light Angelica, Summertime Iseria, Peira, Conqueror Lilias and so on. She can snipe enemy attackers if you have her exclusive equipment that targets the unit with the highest attack.

If you cannot outspeed the enemy, she will be good in that role. Her passive cleanses any debuffs immediately, including stuns. She also has life steal and evasion buff on her S3, improving her survivability just a bit.

Her own artifact Secret Art Sword Storm is the best to get a free attack buff when enemy uses a non-attack skill.

Stats to aim for are:

Speed is a bonus really. Ideally if you can get her to 180+ speed with the above stats would be really good. However, if you are a new players, speed is probably the hardest stat to get without giving up damage.

Ever since he got the perception buff, he has been a very reliable attacker. He does more damage and can deal with any ice unit easily. The only downside is that the evasion is a bit to random and it always seems to evade more on the enemy team.

On enemy teams, evasion has always been a problem for raw damage dealers. Missing damage on him usually means your damage dealer would die unless it is a fire unit. His default artifact to use is always going to be Moonlight Dreamblade.

Stats to go for are:

He doesn’t have to be the fastest, but having high health and damage is all you need as a reliable single target DPS. He shines in both PvE and PvP, making him a solid choice to 6 star.

Chloe may not excel in PvP, but she does really well in PvE due to her magic nail ability on her passive. It ignores effect resistance, and is quite popular in 1 shot teams against Wyvern, Banshee and Azimanak hunts. Her S3 hits really hard, especially against monsters and bosses. For new players, I would highly recommend her to build her as part of your hunt teams. Her general stats will depend on your current gear level.

For the other hunts, she can have lower speed and more critical damage for maximum damage output as long as she has other support units boosting her combat readiness. Artifact wise, she can use Daydream Joker, Uberius Tooth, Exorcist’s Tonfa, Symbol of Unity or El’s Fist for bonus damage.

When the game first came out, he was a really popular single target attacker in the speed cleave meta. Although now it is harder to cleave in higher PvP battles, he still offers the very useful speed imprint alongside good damage. He is one of the first units to have elemental advantage on fire units, as long as he has a speed buff.

His single target damage goes up with speed buff and attack buff. Units like Sinful Angelica or Yuna will improve his DPS in team play. He also can defense break on his S1, giving him more utility. Once he is able to kill 1 unit, he can snowball really hard since he gains an extra turn after a kill.

He does require a lot of stats to perform at the highest level, so do be prepared to spend some time to gear him. Here are some stat guidelines for PvP:

If you cannot get more than 230 speed, you can run a speed buffer ahead of him and turn him into a follow up damage dealer alongside a combat readiness pusher.

Good artifacts to go on him are Rihanna and Luciella, Dust Devil, Symbol of Unity and Exorcist’s Tonfa.

Much like his RGB version, he is really good at taking out units by himself. In exchange for low defense, he gets an evasion buff every turn. His S3 ignores 50% defense and gives him an attack buff, allowing him to pretty much 1 shot any fragile damage dealer. He does have problems with very tanky healers and tanks though.

His artifact of choice is Violet’s Talisman or Moonlight Dreamblade. If you don’t have those 2, you can use any bonus attack artifact such as Exorcist’s Tonfa or Symbol of Unity.

With really good gear, he becomes very scary and is very reliable in both PvE and PvP. It is much recommended to gear him for PvP. Ideal stats to go for are:

If you can get him to 250+ speed, he becomes very scary and can be hard to deal with in PvP. Even worse if he is on Guild Wars defense teams.

A. Ravi, the bruiser that can be very annoying to deal with. Having her on your side is a blessing though. She can hit hard with both her S3 and her S1 (Soulburn). If her S3 kills someone, she revives a dead ally with skill nullifier. She is mainly used for PvP, but can come clutch in PvE as well, especially in Abyss.

If you are using her for PvP offense, I suggest building her with a destroy set if you are able to farm Caides Hunt.

Since her passive has additional critical hit rate, getting her to 100% crit rate is quite easy. Stats would be:

Artifacts to use are Proof of Valor, Crimson Seed, Durandal and Draco Plate.

A thief that has revive, immortality and an anti one shot passive. Her S3 cleanses debuffs, revives all allies and gives everyone immortality. She gets a buff that counter attacks when she takes a critical hit. Her passive also reduces her S3 cooldown when somebody dies, thus making it harder for your enemies to kill your entire team easily.

Due to her kit, she is easy to build. She doesn’t need much health nor effectiveness. All her stats can be focused on attack, crit rate, crit damage and speed. She is basically the light version of ML Ken with more team utility.

Stats to go for are:

Good artifact for her is definitely Dust Devil to get extra procs on her S1. If you don’t have that, Exorcist’s Tonfa or Symbol of Unity are decent replacements.

She is one of my favorite units to use. Although she is squishy, she can be a speed demon and take out key damage dealer units on the opposing team. However, she can be pretty hard to gear due to needing a lot of speed gear alongside all the offensive stats. Once she gets the required stats though, she really shines.

Since she gets a free attack buff as long as she isn’t debuffed, she can be self sufficient without needing an attack buffer on your team. Her stealth after attacking makes her hard to get targeted, especially if the enemy team doesn’t have any AoE attacks. Her exclusive equipment also provides debuff immunity  after using her S3, which I think is the best one to use.

Here are the stats you will want to aim for:

Anything higher really is a bonus. With soul burn, she can take out most damage dealers, unless they are protected by barriers, Aurius or damage sharing.

Some good artifacts on her would be Symbol of Unity, Rihanna and Luciella, Dust Devil, Exorcist’s Tonfa and Elyha’s Knife.

This concludes the top 10 best single target attackers in Epic Seven. Cheers and till next time! 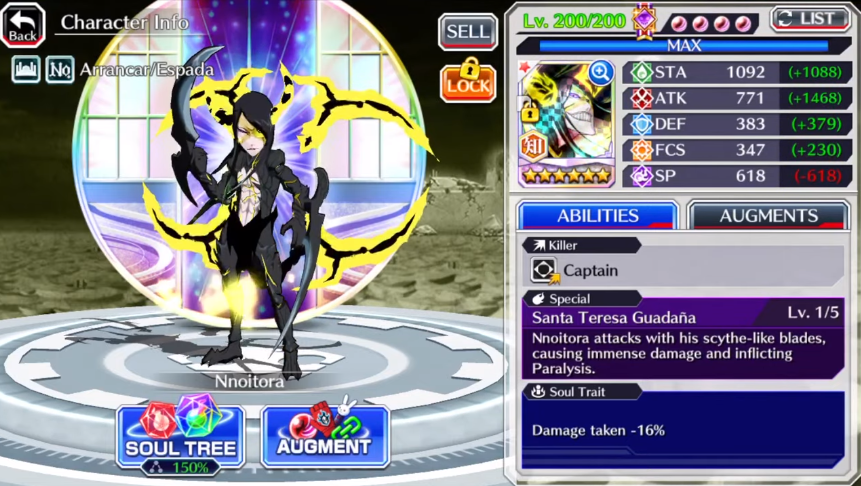 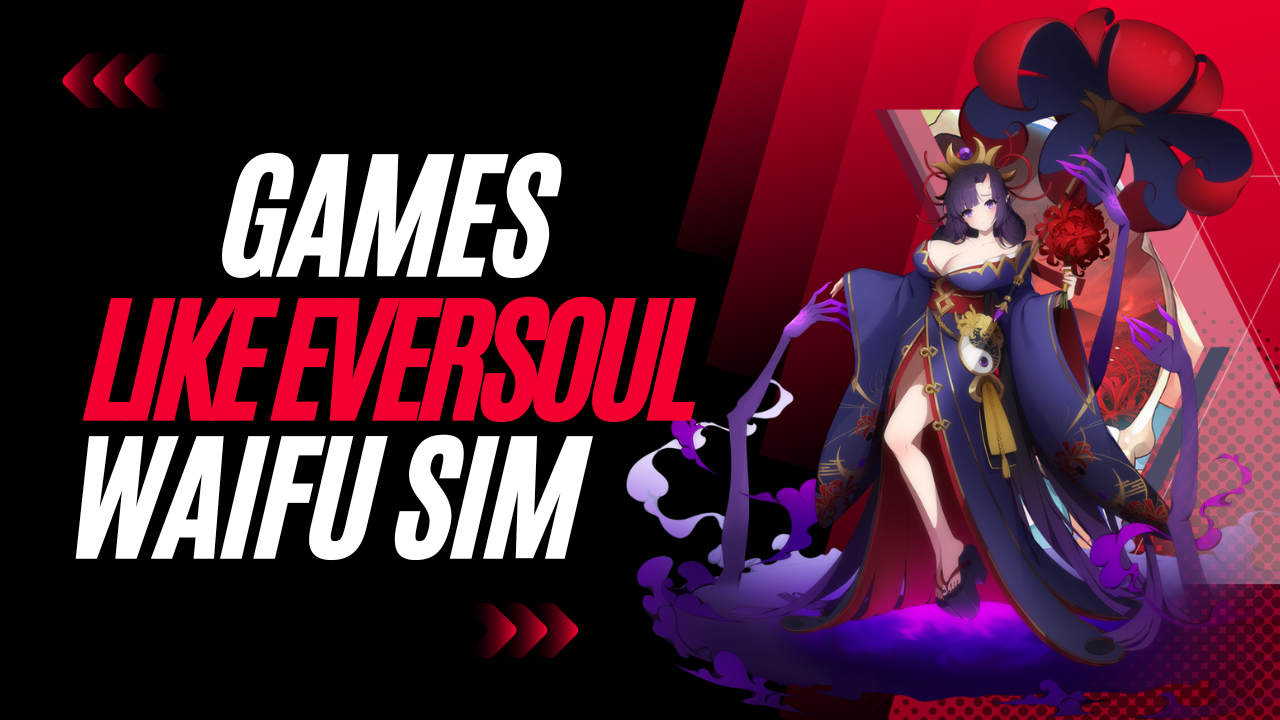 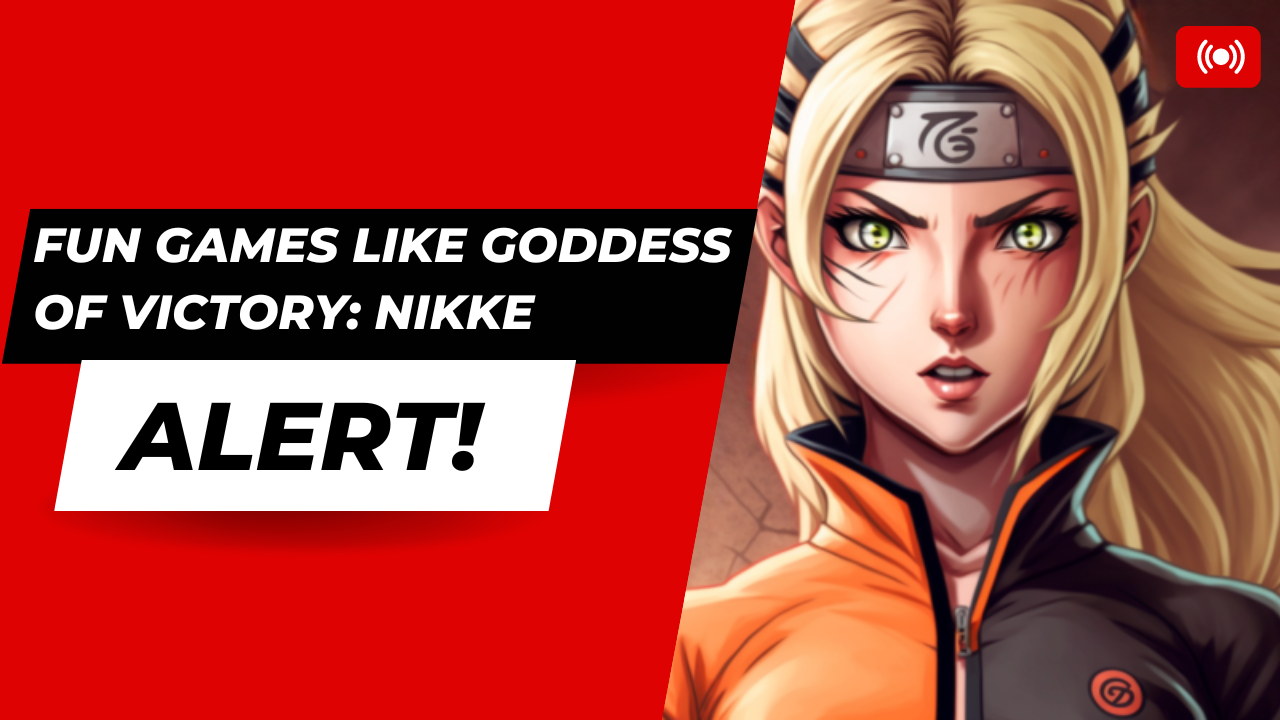