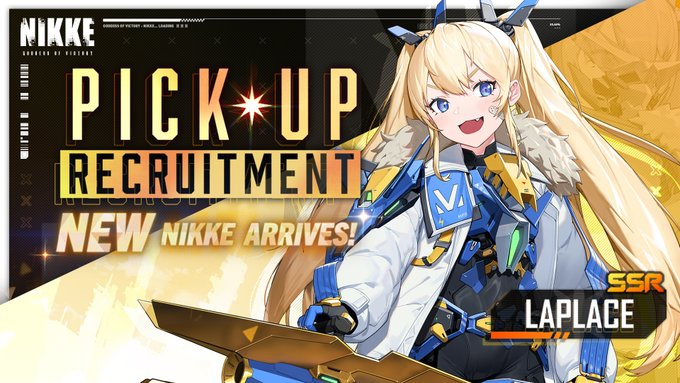 So Laplace is the next banner and we are also getting chapter 17/18 updates alongside some new events. And seems like they will fix the bugs of the current characters, I hope.

There is a 4% chance of acquiring SSR Nikkes in Special Recruit, and a 2% chance for Laplace.

You can get Gold Mileage Tickets when recruiting in Special Recruit.

You can exchange 200 Gold Mileage Tickets in the Mileage Shop for 50 Laplace Molds.

With 50 Laplace Molds, you can acquire Laplace.

During Special Recruit, unused Gold Mileage Tickets will not disappear.

You can use Gems (Free/Paid) or Advanced Recruit Vouchers to recruit in Special Recruit.

When Special Recruit ends on 12/08/2022, Helm and Laplace will become available in both Ordinary Recruit and Social Point Recruit. You may also use mold items to recruit them. (Neither character will be available in New Commander Recruit and Tutorial Recruit)

When updates are completed, Helm Special Recruit and Helm Molds will no longer be available in the Shop.

– Those who chase their dreams with unwavering dedication

– People who are brave enough to stand their ground are worthy of being called heroes.

How to unlock: Clear Chapter 16 in Normal Mode.

Numerous mass-produced Nikkes have gone missing after being sent up to the surface.

Missilis has lost the most mass-produced units of all the Big Three, and the company is experiencing serious financial repercussions for this quarter. The Matis squad has been sent to the surface to investigate.

You will have a chance of obtaining [Hero Dice] when you clear the event mission or use designated characters to clear the stages. Use the Hero Dice to take your first step on the [Hero Road] with Laplace, a Nikke who will stop at nothing to become the greatest hero the world has ever seen, and earn all kinds of rewards.

Mini Game—Hero Road: Rolling the [Hero Dice] will make Laplace move forward to a tile according to the number shown on the dice. Landing on different tiles will grant different rewards. You will also get Recruit Vouchers, Advanced Recruit Vouchers, and many other awesome rewards based on the total number of times you roll the dice.

During the event, sign in on 7 separate days to earn high-quality molds, Advanced Recruit Vouchers, and many other rewards.

(1) New Character Package: We are introducing this new item to the Cash Shop. For further details, check the Shop panel.

Detailed information regarding optimizations and bug fixes will be given upon completion of the update.