Welcome to the Figure Fantasy tier list! We are grading the top characters/units in the game that is going to help you progress in the game. We will update this guide as more units are out or if the meta changes.

We did not separate the tier list based on their roles but grade them on overall usefulness.

Also, the abbreviations in front of their names are: 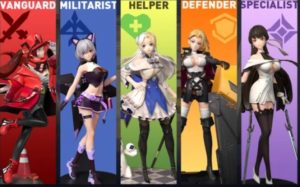 H-Zehpyr - Top helper that can heal your your team and also restore their energy.  She can also boost their ultimate power as well. Keeps the entire team going!

H-Erikzia - Provides fantastic buffs and has tonnes of utility. She is good in just about any team composition.

M-Zarola - Hits a single target hard with scaling damage. Her leftover damage can be converted to energy, which is pretty cool. She also deals more damage when enemies die and can detonate herself to deal damage if she takes lethal damage.

D-Khrusos - A top defender in the game, who can become invincible for 3 seconds.

H-Zhou Yu - Good buffer that fits into many team compositions.

V-Suzumi - Good early to mid game character to help you progress in the game. She can summon boxes to heal, restore energy and sustain herself in battle.

As for the C Tier, they are generally good for early game and then falls off later. So you can use them temporarily to help you progress, but they will be replaced by better units in the late game.

You can try and re-roll in the game, but it is not necessary to do so. You are given some good units at the start already.

Figures or Figurines, are the units in which the masters (players) deploy on the 3x3 grid in the game. The figurines come from 5 brands, 3 in which are main brands and 2 in which are special/unique.

The game follows an rpg-style of class-system, in which there are two melee classes, one healer class, and 2 ranged classes (hence 5 max deployable units). The different classes of figurines work together in order to form team compositions or lineups, in which allow the figurines to beat various other hostile figurines in the game.

There are 4 sections to a figurine's basic kit: Basic Attack, Skill, Passive and Special. All which come with an Image, as well as a description of skill upgrades.

Here are some tips: