Welcome to the Mythic Heroes tier list! We will be updating this as the meta changes and also add new heroes when there are major updates. Anything below SSR rarity is basically food. However, you can use a few SR units for the early game to help you progress before you get the SSR and UR units. Here are a few:

Below is how we grade the UR and SSR heroes based on their performance in early game, mid game, late game and PvP.

Keep in mind that tier lists are just rough guidelines on how you want to build your team. Every hero can be useful and can work very well as a team against various content in the game.

Lucifer (Warrior) - He is a very good carry and I would recon he is the best in the game. His ability to tank/evade using dodge and lifesteal makes him great. He can recover energy in his alternate form, plus his damage is very high as he attacks often plus dealing AoE splash damage. His ultimate can knock everyone back and stun them with his following attacks. You cannot go wrong investing in this guy.

Nuwa (Support) - Nuwa is an extremely versatile support hero who can do pretty much everything in the game. She can deal damage, crowd control, heal and buff. Her ultimate buffs the entire team with distinct effects according to their classes for up to 10 seconds. I would rate her as the best all around unit after Lucifer.

Cassandra (Support) - Another strong support that can heal all allies and sustain your entire team. If you didn't get Nuwa, she will be your key support healer that prevents your carries from dying quickly. She is an SSR, so it is easier to try and pull her than say Nuwa.

Zeus (Mage) - A classic damage dealer that specializes in AoE damage. He has a damage over time passive that ticks as long as he deals damage to the target. He also has a shield buff that can protect an ally but also deals AoE damage when the shield is depleted. Overall, he is good damage dealer for any team that needs to clear many enemies at once.

Western Queen (Support) - A great support that can boost an ally's attack speed, attack power and also heal them. She focuses on single target heals, so she is not as good as Casandra as a full time healer. However, she can also reduce the energy of the enemies, which is very handy at times. She works best in teams where you have one strong damage dealer, which allows her blue bird to focus on keeping the him/her alive to deal all the DPS.

Typhon (Tank) - He is a decent support that can buff all ally attack at the cost of some health and also deal damage. He can debuff enemies (decrease defense, anti-heal, lower dodge) based on the color of his snake. When any ally falls, he can summon a snake to deal damage. At the start of battle, he generates a shield that can deal true damage to enemies when destroyed. I think if his snakes aren't that RNG, he would be at S tier.

Tamamo No Mae (Mage) - Does good damage and have some AoE attack. She can deal damage and keep herself safe with Phantom Dash. However, sometimes, she will teleport herself to a bad spot. You are going to need a healer still to keep her healthy so she can keep dealing damage.

Susanoo (Warrior) - Susanoo is a good single target attacker that can help you stun single target enemies. He is useful against enemies that are dangerous and need to be crowd controlled.

Persephone (Mage) - She is more of a support attacker since she can help protect your team from physical damage. She can also help dispel enemy buffs and her Nether Flowers passive reduces enemy healing and deal damage to them as well. Overall, she is great against enemies that deal heavy physical damage.

Nagakanya (Support) - She is a support healer with some crowd control. She can provide damage mitigation and team heal with Aqua Barrier. Surging Wave can stun an enemy, which can be clutch at times. Her special skill is an healing over time that affects all allies.

Izanami (Mage) - A good attacker that has good self sustain. If you lack healers, she will be a good DPS unit to use so she doesn't die easily in harder content. She also has some damage mitigation to help her survive as well.

Iset (Support) - She can revive a unit with Revival Ritual, but it can be interrupted, so it doesn't always work against heavy crowd control enemies. She can buff allies with her attack and also help regain their energy. She can cleanse debuffs and her passive can also deal damage over time. While she is useful, her healing is lacking compared to a pure healer, so she is not as good as Casandra in my opinion.

Idun (Support) - A good support that can heal and protect allies. She can also steal energy from enemies with Spirit Away. Every once in a while, she can mitigate 1 attack that deals more than 10% of an ally's max health. I find her to be very useful alternative to Cassandra.

Hela (Support) - A support attacker that can heal allies and debuff them by lowering their attack speed. Anyone within her circle Foul Essence also takes reduced damage. Quite useful if you need a hybrid healer and attacker. A team that relies on lifesteal and healing will also benefit from her passive.

Ganiang Moye (Mage) - An AoE damage dealer that has an ultimate that can heal herself and it cannot be dodged. her passive gives her doge and increased crit rate, improving her overall DPS. You will want to use her against missions with many enemies.

Athena (Tank) - A good tank that can provide barrier for all allies and also deal some AoE damage. She can take a lot of damage thanks to her passive. When skills are upgraded, she can start to heal herself and allies. That is when she shines.

Artemis (Warrior)  - Good hero that specializes in crowd control. She is best in the backline, dealing damage and stunning enemies.

Archimedes (Warrior) - A utility damage dealer with some AoE attacks and can apply defense debuff to enemies. Quite useful when a healer and damage dealer is in the team.

Amaterasu (Mage) - A utility attacker that deals more damage over time. She can lower the accuracy of an enemy and that skill is great against bosses. She can also prevent enemies from using their ultimate. She brings a lot to the table as a secondary DPS with good support skills.

Lilith (Mage) - Despite being a UR, she doesn't offer much at the moment. Perhaps she might have some use in new missions.

Mythic Heroes is an idle RPG full of powerful Gods and heroes from different cultures, where you summon and form your own unique team. You must fight against the dark forces that threaten the world, while enhancing your army's abilities, skills, and weapons as you embark on an adventure to save the realm.

Here is a simple guide to help you get started on who to use and potentially re-roll for:

Here is an old tier list by Asura#4273 from Discord: 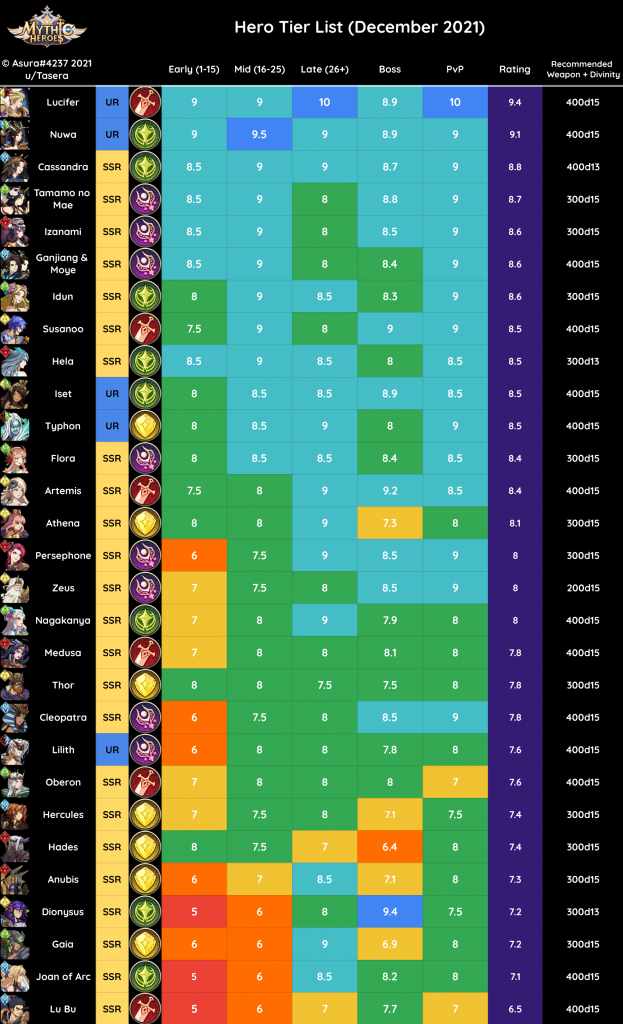