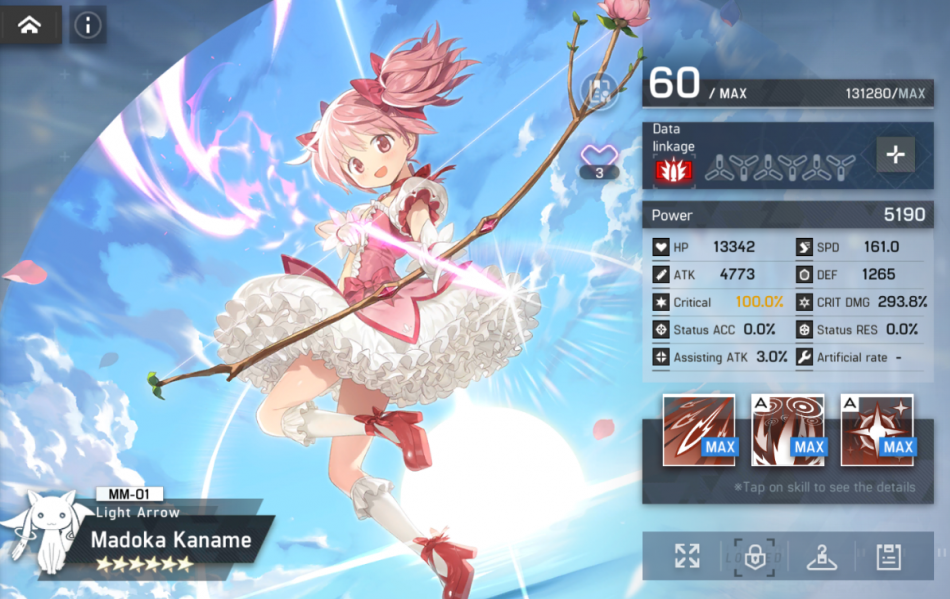 Welcome to the special collaboration overview of the magical girls.

Let’s talk about who you should focus on, depending on where you are at in the game. I have split them into new/early game players and end game players. This is determined based on:

Here is the order of rankings I think is beneficial to most of the player base in this group.

Madoka is the top AoE DPS for the Molten units due to her ignore defense mechanic, which ignores up to 85% (with unique equipment maxed) when using skill 3. This allows her to destroy non blue tanks with ease and make most content in the game trivial. On top of the ignore defense, it also cleanse 2 debuffs if it is not on cooldown, allowing her to always use it unless the opponent can apply 3 debuffs or more.. She also has damage reduction, which makes it hard for her to get burst down, especially if you have a supporting team that can also help mitigate some damage.

She is viable in both PvE and PvP content. In PvE, she can help you with Centuar, Iron Maiden and Octopus due to her big skill 3 damage. She can also act as a single target DPS against high defense bosses as the ignore defense just cuts through it. If you didn’t have Nina, Madoka can take her place.

In PvP, when well geared with 5k+ attack and 250%+ Crit DMG, she will one shot most teams without any blue units on it. This includes all the pesky tanks like Acacia and Hearin.

In my opinion, she is the only one you need to help make your PvE life much easier. If you do a full 90 pull to get her, you will have enough materials you can farm from the event itself and the pity counter rewards to max her unique equipment.

As for other units, they won’t be at max potential if you don’t max out their unique equipment. So that is something you want to consider if you are pulling more than 1 unit as F2P.

Sayaka is a good pick if you have already gotten Madoka, as she provides single target DPS alongside a defense break on her skill 1. She does good damage and can be compared to Lila from the Ryza collab. However, Sayaka is the more defensive version and offers more utility due to the defense break and good damage. If you already have Lila, she may not be necessary since there are many good blue units that can apply defense break such as Chihaya and even Nio the free unit.

As for Kyoko, she is also good as she is the defensive pairing for other healers to keep your team from dying. Defense buff, crit resist and damage reduction on top of protecting allies from single target attacks are all great skills to have. Think of her as the more defensive Jessie. While there are content that requires some tankiness in PvE, most content just don’t need much defense, except for Raid Bosses and tough content like Suppression of Darkness bosses.

These 2 are up to you to decide if you want to pull if you more extra resources to pity another one. I would like to put Homura here as well, but she is more end game PvP focused and for new players, that is not something you want to focus on until you have farmed some decent gear.

As mentioned above Homura, she is mainly for high tier arena battles (4000+ ranking)  and higher. I will explain this for the end game player section.

Mami Tomoe on the other hand, is a pay to win character as it requires you to spend actual crystals pulling units to get it. She is the inferior version of Madoka as she needs to have higher attack than the opponent to ignore defense. This means she is great against tank teams and less effective against high attack teams. Also, you need to spend up to 72,000 crystals summoning to fully max her out, which is out of range for F2P players.

Madoka needs no explanation, as she just one shots any non blue units in PvP.

As for Homura, she can increase the skill cooldown of other units via her passive, thus disrupting their cleave. Also, she can prevent the bonus turn mechanic and stop units like Alice or Lila from being effective at what they do. The thing is that she is hard countered by immunity sets as she cannot apply her debuffs on the opposing team. She also needs her unique equipment maxed to be effective at what she does as well. Also, her base speed is good at 122 and can contest for turn 1 for sure.

Both Sayaka and Kyoko are also decent in PvP, with Kyoko being more of a nuisance in PvP defenses. Having already built Lila, I think Sayaka doesn’t offer as much value and is more of an alternative option.

Not much to say about her. For a whale though, she is a luxury unit for PvP where she destroy tank teams but may struggle with high attack teams.

Overall, just pick whoever you like if you don’t give a darn about meta units. These are just my opinion as an F2P player since day 1. Having only pulled limited collab Banners (Lila 180 pulls and Madoka 90 pulls), I haven’t spent a single crystal on regular banners.