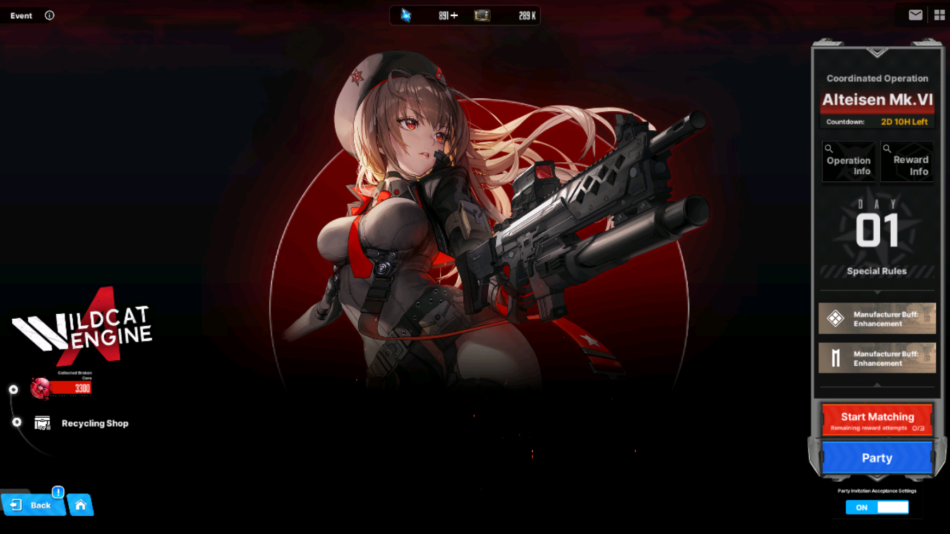 With the first co-op event launching and having did my first 3 matches with random players, here are some thoughts and tips I have for you folks. If you can, play the game in landscape mode on PC. It gives you a slight advantage. Not only will you be able to see a greater range and can anticipate any missiles ahead of time. The boss is pretty much our Interception D Alteisen Mk VI, but much easier in my opinion.

I did not manage to hit all 3.6 million points each time, but I was getting 3.1 million average, receiving 3300 broken cores after 3 matches. One of my teammates died on the second match, lowering our score a bit. Having a healer on the team was mandatory for this just in case. All players are capped at level 40 and the only thing giving more advantage is your character’s gear and skill levels.

Important: Always ensure you guys have at least 1 of each Burst I, II and III type in the team. Otherwise you folks will never get to go to full burst phase, making the match harder.

When you get into the match screen, your want to see who has the highest combat power BURST III attacker on your team.

So whoever has Scarlet, Harran, Helm or any DPS really and they have the highest score, let them use it. There is a high chance someone on your team has Scarlet.

Picking a Burst I or Burst II support character is the much better choice if you don’t have top notch DPS. A healer such as Emma or Mary is quite good.

Also, if you are terrible at aiming, it is best to pick characters with assault rifles, mini guns or sub machine guns. They are easy to aim with, having lots of ammo and it helps a lot in targeting those boss weakness red circles when they come up. The boss is not very hard unless your team doesn’t have any burst III attackers. Pick whoever you like really. 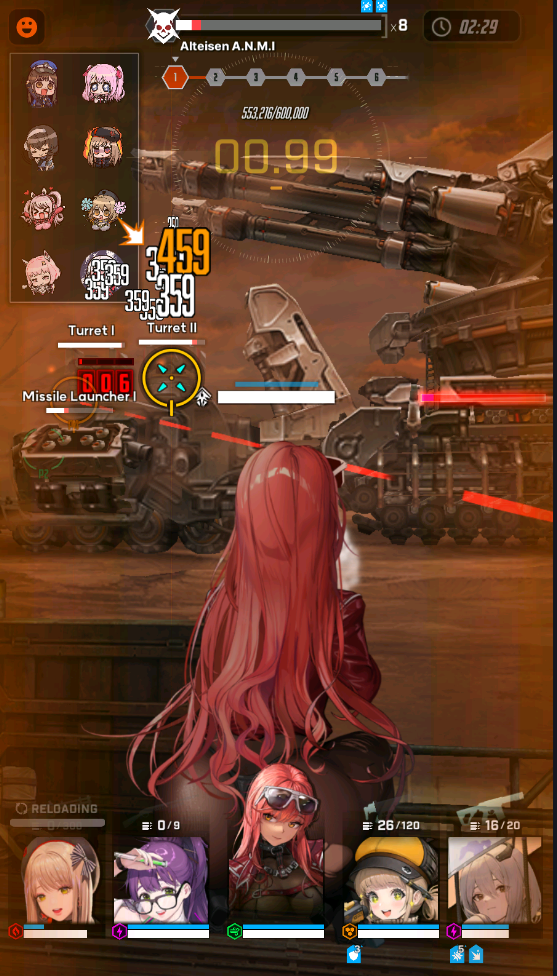 Scarlet died and we only did about 3 million points.

The battle sequence is also similar, but there are some slight changes.

First round you have the train coming out, and you want to focus on taking out the incoming missiles and also the turrets on the train. Failure to do enough damage can cause heavy damage to your team when it shoots those green missiles.

When the first red circle pops up, make sure to focus fire on it. Letting the boss charge up and release his attack will cause heavy damage.

On round 2, the same pattern repeats and you want to repeat the same strategy. However, this time when the boss charges up the special attack, there will be 3 weak spots. Prepare to shoot them. This is where the assault rifles, mini guns and sub machine guns do well since it is easier to aim compared to sniper rifles or rocket launchers. If you happen to lag, those misses from sniper rifle/rocket launcher units can really mess it up.

Round 3 is similar to round 2. So utilize a similar strategy.

Recycling Shop and What to Buy 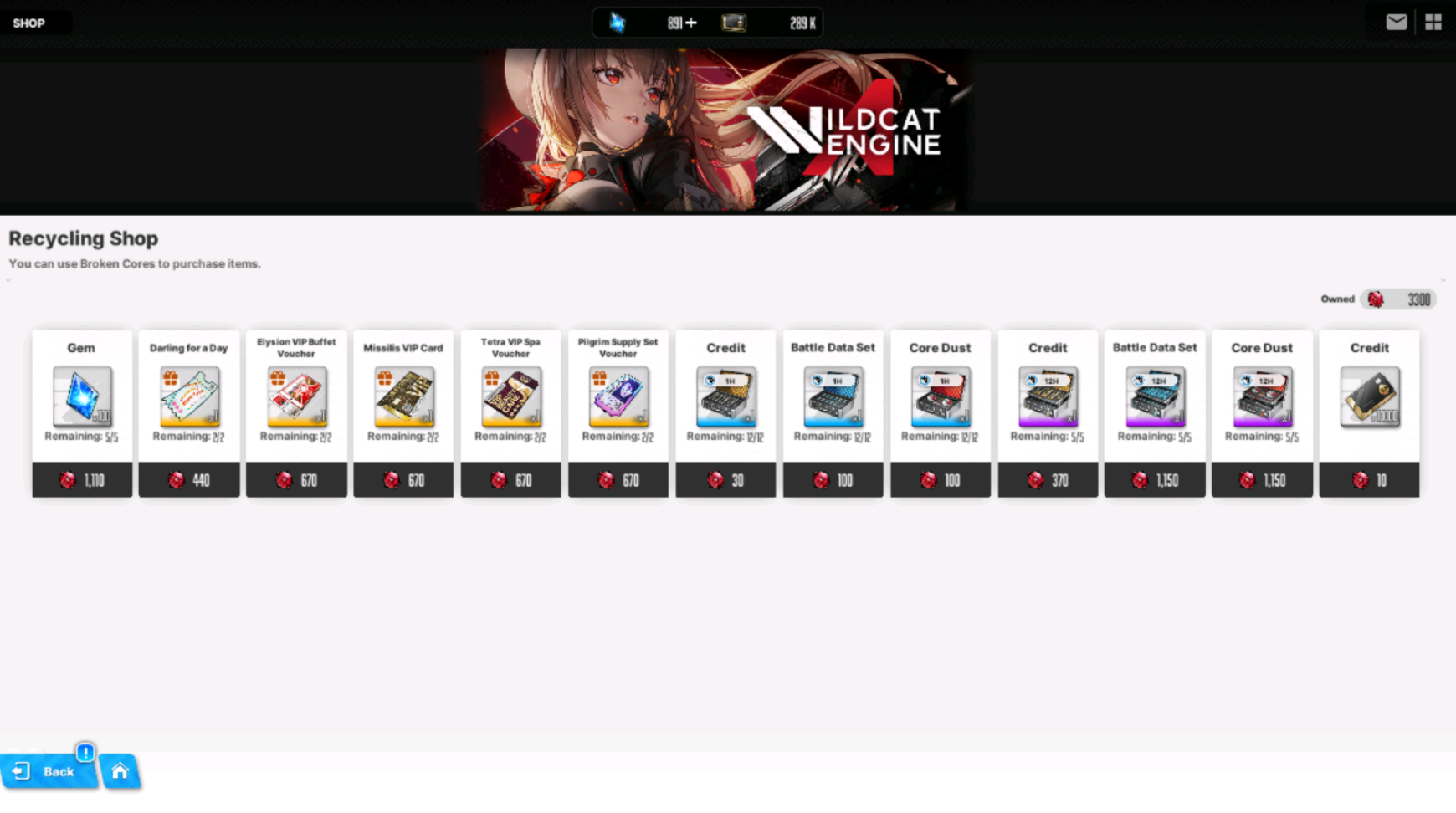 The shop has the following total costs per item (thanks to reddit):

This totals to 27,850 cores. The event lasts 3 days, with 3 attempts to get the rewards per day and the maximum cores you can get per attempt is 1,200. That is a total of 10,800 cores. If you factor in some deaths or disconnects, getting 1000 broken cores per challenge is more realistic. Since you cannot clear the entire shop, you will have to look at what you need the most.

The final reward not listed is the Credit x10,000 at the cost of only 10 broken cores.

Having done some quick calculation, the gems are totally not worth buying. Also, since the credit/core dust/battle data set with 1H/12H are based on your own Outpost level, they can be a good deal if you are higher level.

A new player gets the best bang for their buck by getting the Credit x10,000 at the cost of only 10 broken cores. With only 1000 broken cores, it will net you 360k credit, which is going to help tremendously for Tactics Academy and also your progression past chapter 8. You will not run into low credit issues anymore.

The 12H Battle Data Set and 12H Core Dust are okay to get if you want to further push your team combat power and levels to push story mode.

That is it for now. I will add additional tips later when I can think of more.

A nice infographic was published by Shift Up, which you can have a look below: