With the new difficulty levels that Dislyte made, the new Kronos 16 boss hits harder than ever. The old Kronos 10 is now actually around the 12-13 difficulty. So if you are unable to farm 16 efficiently, it is best to stick to the Kronos 12-13 and you will still be doing well there. If you can clear K16 it at least once, just do the expeditions, they are a good source of relics each day.

Why Focus on Kronos 16 Dungeon?

Kronos 16 drops ONLY 6 star relics and and actually drops quite a lot of 3/4 sub stat relics. This means that you are able to find more usable relics over time. From the amount I have farmed over the course of a week, I found some decent relics to use.

Much like the old Kronos 10 patch, K16 still drops the same sets:

Update: Here is my final team after 2 weeks:

Q is a bit underrated but I know he isn’t the most popular, so he probably won’t be used much elsewhere.

So Kronos is a giant looking golem that is accompanied by 2 crystals that will try to disrupt you. Let’s look at the key mechanics of this boss.

In K16, it is key that you do not let the right crystal go. It will cleanse all the debuffs on him and give him a turn. Krono’s damage is insane, and most of the time, DPS units can only survive 1 hit with some damage mitigation with shields from adamantine or with units that can provide shields or damage reduction.

Now let’s go over the stat requirements for this difficult stage. Ideally, you want these baseline stats for most of your espers.

This is key as you want them fast so they can cast their buffs, AP control and keep lapping Kronos. Kronos can potentially delete anyone that don’t have these defensive stats, making you fail your runs. So most of your DPS will not survive if Kronos lands a crit on top of his stone attack on the first turn unless there is damage mitigation.

This will depend your relic quality. If you can consistently clear Temporal Tower to about 40+, you should have enough to come up with decent DPS gear. The thing is, your DPS needs to survive, so having at least 17k+ HP with defense buff or shield will prevent them from getting 1 shot.

There is a strong accuracy check in this difficulty. You will need at least 60% accuracy to land debuffs. Kronos has insane resistance nad even with 80%+ accuracy, him resisting is very common.

All luxury units will be excluded. 4 star units are included as if you have started playing global since launch, you may have pulled a few of the 4 stars mentioned.

A good option as he also has the speed lead, which can help control Kronos. He does need 60%+ accuracy for his AP control to land more often though. Since I use him as a primary damage dealer, I had him only at 24% accuracy. 200+ speed is mandatory to make sure he can lap more often.

Li Ling is also good choice here since he has AP stealing on skill 1 and 3. You will need some accuracy (60%+) if you want it to be reliable. However, I think building him with pure DPS is better. Make sure to build some defense and hp on him.

Chalmers is still good here, but he will need a good supporting cast to keep him alive. This includes Berenice or premium options like Ollie and Clara. He has lower health and defense, so he is also vulnerable to a 1 shot from the rock drop that crits him.

Chalmers and Leon were really a good pairing in the old Kronos 10. In K16, Leon can also help apply sear and deal damage as well. He can be built full crit dmg with some health to help survive. With elemental advantage, he is less likely to die than Chalmers.

Also another viable option. If you have Lin Xiao or other debuffers, he will shine. His stealth will prevent him from getting the rock drop, but he still needs enough health to survive the AoE shout attack.

Ren Si is also an okay choice here since he is tanky. However, most people use him for PvP, so building him here for PvE is a bit less recommended. However, with decent speed and high defense, he can do very well here for damage and also acts as a secondary defense breaker with his skill 1.

For F2P options, there is only Drew honestly. I didn’t include Lin Xiao and Unas since they are luxury espers.

Drew is a good option here due to his defense break on skill 2. Although it is only an 85% chance, he is the only accessible option for F2P players right at the start. He is going to need some decent health and defense or some form of damage mitigation to not get destroyed by Krono’s attacks.

Aside from Unas, he probably has the best defense break in the game. His skill 3 hits 3 times with a 100% chance each to land it. As long as you have 60%+ accuracy, you should be able to land it on Kronos at least once every time he uses it. He also has self crit rate buff, which allows him to be a secondary DPS as well. With elemental advantage, he also dies less to Krono’s attacks.

Still one of the best supports for K16. She also has the vital defense/attack buff and attack down debuff, which will help reduce the odds of one of your DPS biting the dust. Her small heal and invincibility is also enough for some teams to sustain and kill Kronos in time.

Dhalia is also good here, but she does best in a full out offensive team that can quickly take down Kronos. She has AP push, attack/crit buff for the team and her skill 2 slow is handy here as well.

Medusa is great here now that AP control on the crystals is vital to making sure your team survives. She can apply slow debuff on her skill 1 and AP push back Kronos and the crystals with her skill 3. Do not sleep on here if you don’t want to use the following unit Lucas.

Lucas is also an okay unit to use here. I personally use him because his skill 1 and 3 have strong AP push back. Despite the nerf on his skill 1, it can still steal 30% AP from Kronos. His skill 3 is vital in making sure that the crystals also get pushed back.

With the new buffs, she is the top choice for being the permanent AP push back unit against Kronos and his crystals. Since her skill 2 resets her cooldown by 1, she can spam skill 3 all the time if she is in the leader position as the AI prioritizes the leader. Since her skill 3 pushes back all units and also apply speed down, it is the perfect combo. She also has elemental advantage.

Berenice is a decent backup as her shield can help prevent one hit KOs. However, due to her elemental disadvantage, she cannot be relied upon to land her defense breaks or AP push back on her skill 1 and 2 respectively. Other than that, she does fine in a tanky team though.

This is my own personal team which I will list below:

Eira is the leader to help spam her skill 3. The average run times are around 2.40 minutes, with a 83% win rate out of 100 runs. It is good enough for me personally, but I think as gear improves, the success rate will increase. I like to put Ye Suhua at the last slot as I notice that Kronos likes to target the last slot for some reason. 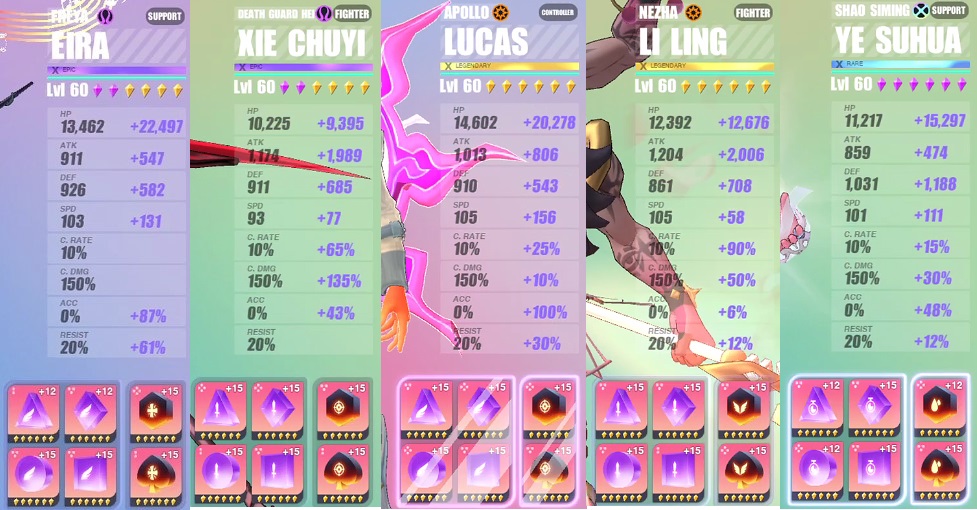 If you cannot do K16 yet, just keep farming the lower ones like 13-14 until you can get the required stats for 16. It is a long grinding process. Good luck!