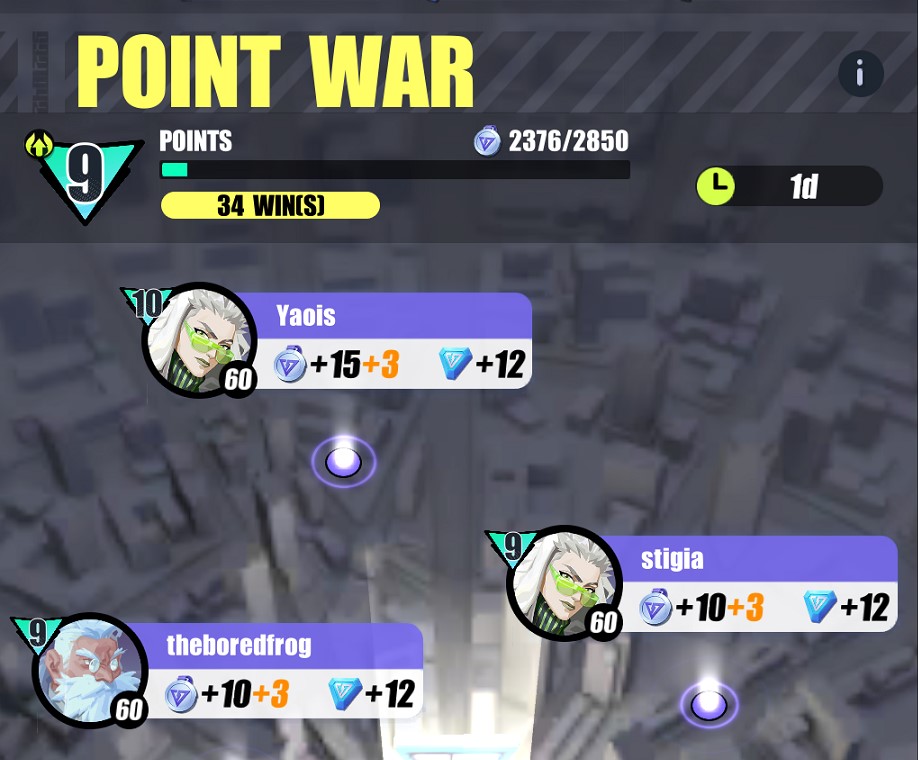 Welcome to the Point Wars guide for new players! In this tutorial, we will go over the key mechanics of this PvP Ai system so you can earn as much PvP tokens to buy those goodies in the tournament shop.

Why Do Point Wars (PvP)?

Point Wars is one of the few ways to consistently get the rare legendary abilimon, which is used to rank up your legendary esper skills. Some legendary espers need the skill cooldown reduction to be super effective for their roles. Otherwise, their full potential is not unlocked until then.

Point Wars also gives you consistent nexus crystal and supply voucher income. Depending on your rankings, you get a fixed amount weekly.

What to Buy in the Tournament Shop? 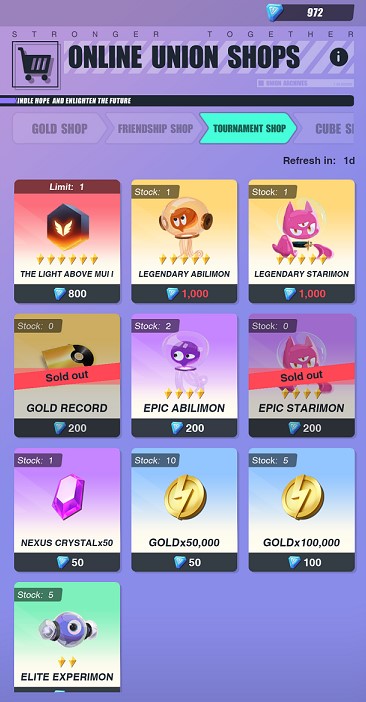 For a new player, the  “The Light Above” Mui II piece with a ATK% main stat is a really good first buy. You need 6 star pieces for your initial DPS espers and this will be on of the pieces. The other Mui I piece can wait. Then, the legendary abilimon is the most important one to buy on a weekly basis.

After that, the gold records and epic abilimons are next. I would give up on the epic abilimons if I do not have enough left to buy. Gold records are a must in my opinion as over the long run, you want to keep pulling espers to improve your chances at another legendary esper. So to summarize:

For early game to help you climb to tier 7, which is where you start getting 12 supply vouchers per win. On a weekly basis, you get 420 supply vouchers and 120 nexus crystals, which is pretty good for its difficulty level. You do not have to have a top tier team to get there. So that would be the first goal.

So when you are trying to find opponents, the game gives you 5 times to choose from, with the option to refresh the teams every 30 seconds. Alternatively, you can do 1 battle and usually it will allow you to refresh once.

However, if you want to climb the arena, then you have to fight the top 3 opponents. They will provide you with PvP points to get to the next tier.

When you start winning battles consecutively, you get bonus PvP points for keeping the streak.

You want to keep the streak going to maximize your ability to climb the arena. You will also get a feel of which teams you can beat. Also, if you don’t have good speed relics, it is better to tackle teams with ATK or HP leads over SPD leads. This gives you a better chance here.

Now let’s talk about building a basic team to help you climb. You are welcome to replace anyone if you manage to pull an epic or legendary esper that does that role better. Below are your F2P choices:

Generally speaking, you want AoE over single target, but you work with what you have.

Let’s talk about Li Ling and Tang Xuan first since you can get one of them in your first 10 pulls. They both have AoE attacks that can scale off percentage HP of enemies, so they will be effective against tanks. Also, it is better to build a cleave team as it makes the battles go faster overall. You cannot really go wrong with either, although Li Ling will perform better in PvE overall due to him being useful in Kronos.

Mona isn’t the best for PvP, but she can be your starter cleave attacker alongside either Tang Xuan or Li Ling. She also covers the latter’s element disadvantage. She is also free, so why not use her?

Drew is also quite good, if you can get his attack really high and if he kills a target, he can delete other espers easily due to ignore defense. Best cleanup character. I think Dislyte is quite generous to give us a free unit that does decently well in PvP.

Tang Xuan is a bit of an RNG fest type characer due to his extra attacks from Iron Polearm. His second and third skill can trigger his basic skill, sometimes making him do surprise damage that one is not expecting.

Freddy is a bit of a menace when left with low health. He can get standoff and attack buff, allowing him to delete key units of the opposing team. He is vulnerable to buff strips, but at low tier PvP, it is not so common at all.

Leon is also very good, if you can get a debuff heavy team together for him. His 3rd skill can hit really hard when enemy is debuffed since he doesn’t need crit rate.

Zelmer is also another situational type that relies on debuffs for big damage. She does require a lot of debuffs to deal bonus damage though, so it isn’t as reliable as Leon or Freddy.

Melanie is a really good controller to reduce enemy AP. Works best if you need to delay some key espers from moving. However, with so many Gabrielle’s, it is hard for her to do her job unless someone else can strip immunity buff.

Lucas is free from the Spatial Tower 100, but I am not sure how long will they keep him there. He is one of the few AoE buff strippers in the game. His skill 2 can stun while his skill 1 can steal AP. He is very good as just pure support or built with some damage.

Jeanne is also a bit overlooked. Her stuns can be clutch and her skill 3 strips all buffs from 1 target of choice. All 3 of her skills can stun, which makes her also quite good in Cube Miracle and Spatial/Temporal Tower.

Gabrielle is a main stay in your team due to her ability to provide immunity and defense buff. She can also apply attack down and defense break, both very useful debuffs. Make her speed and have her open with either skill 2 or 3 depending on the situation.

Fabrice is also a decent support if you are running a more defensive team. He provides immunity and can push 1 ally to the top, which is most likely going to be your DPS.

Ye Suhua is also an excellent choice, although she is harder to get as you need to camp chat for her Ripples. Aside from that, she gives attack and defense buff, giving both offense and defense together. She can heal and give invincibility to an ally as well.

Brynn is the budget Dhalia. You can use her in a cleave team for her attack buff. However, she cannot push your team up to chain AoE the enemies unfortunately.

Dhalia is the perfect choice for cleave teams. If you focus around 70% crit rate for your damage dealers, she will make it up with her attack and crit rate buff + AP push. This is key in having your attackers cut in to deal damage as well. Very good support that can also hard freeze a key unit with her skill 2. She is also from the Ripple Dimension, so it may take a while.

Chang Pu can be a decent healer that also grants you immunity. However, she needs to be fast to avoid getting your team debuffed. She works well early on, but will fall off going into mid tier arena.

This is a very basic team to give you the best advantage possible. Feel free to replace each role with better espers you pulled. Melanie is the AP controller and the budget speed leader. Gabrielle is there for immunity and defense buff plus maybe debuffing enemies. Dhalia is there to push your team up for alongside attack and crit rate buff. Li Ling and Mona is there to finally follow up with their AoE attacks. You will have to speed tune the team though.

This team works well if you can outspeed most Gabrielle’s. However, if the enemy team is fast and has buff strips, there is a good chance you can lose. However, this team is enough to get you to Tier 6 for sure, which is the bare minimum you want to be in to safely get that legendary abilimon weekly.

By the way, to save building more units, this team is also going to be your defense team. This will deter most players from attacking you.

If you are comfortable with your arena rank, you can just place a 1 unit defense to lower your win rate. Since you will not de-rank if you are tier 11 or lower, this makes sense to do so as you will just sit at that specific tier and farm supply vouchers. You also want to fight the bottom 2 players to just farm easy points instead of killing yourself fighting tougher enemies.

Also, you do not want to climb too fast in the arena. If you feel that you are having trouble winning matches, you are going too fast. Just stay in that rank until you can win more matches.